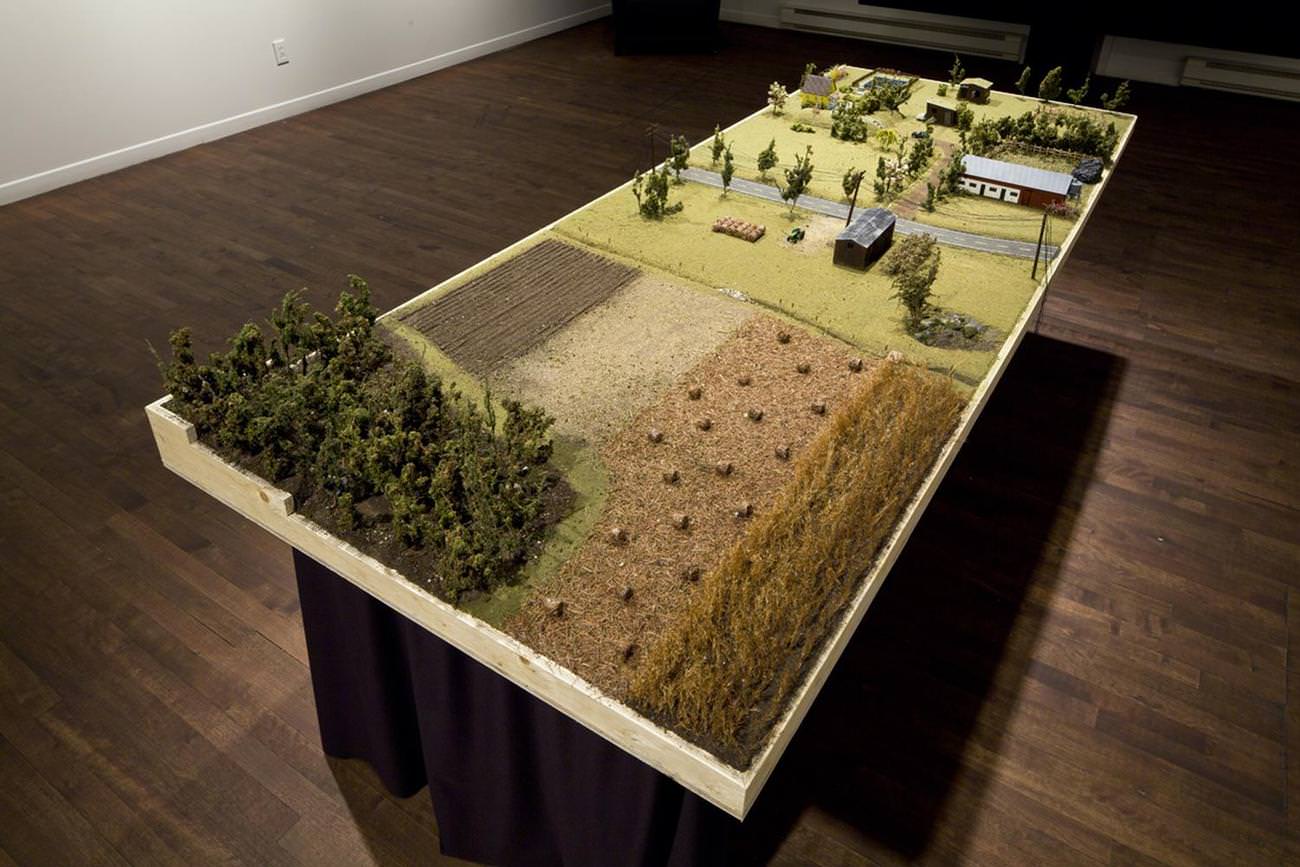 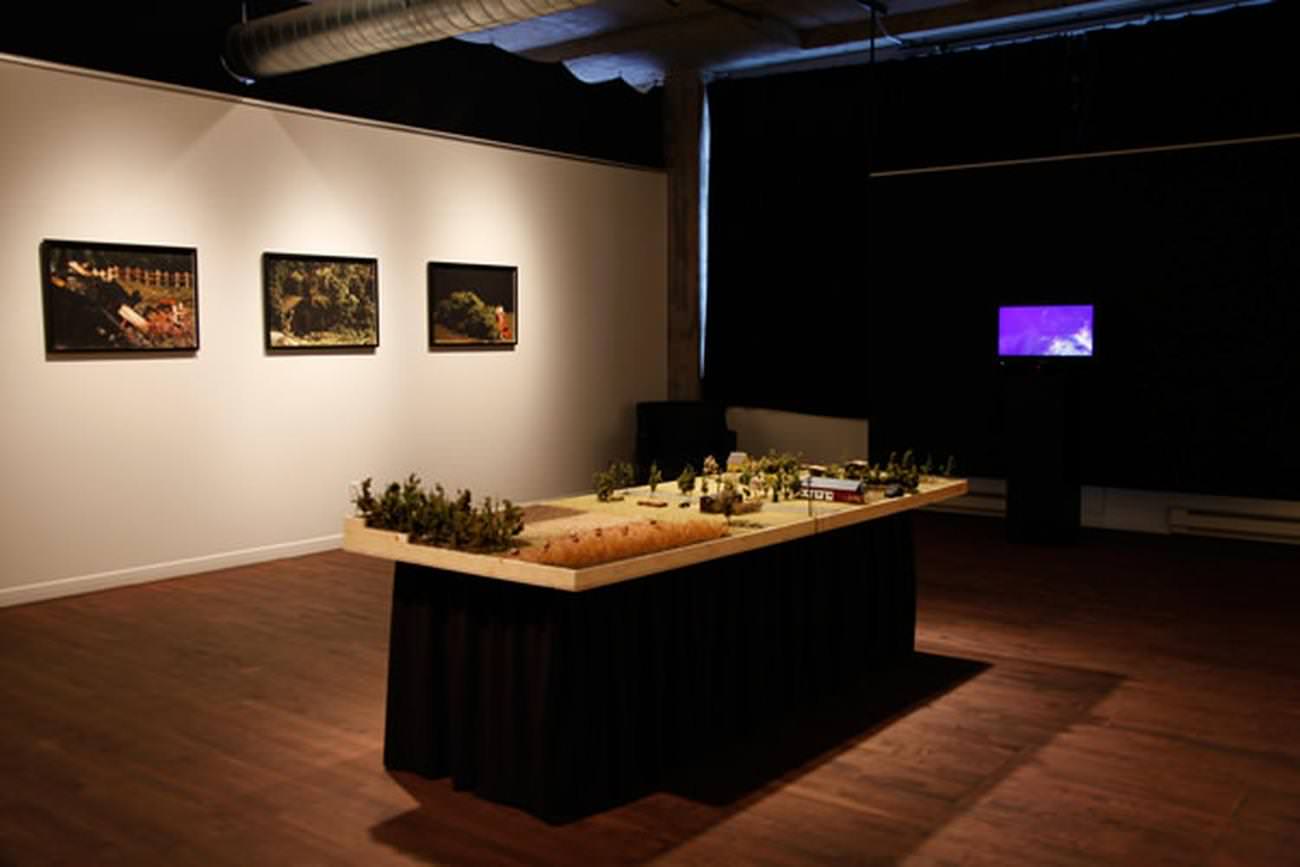 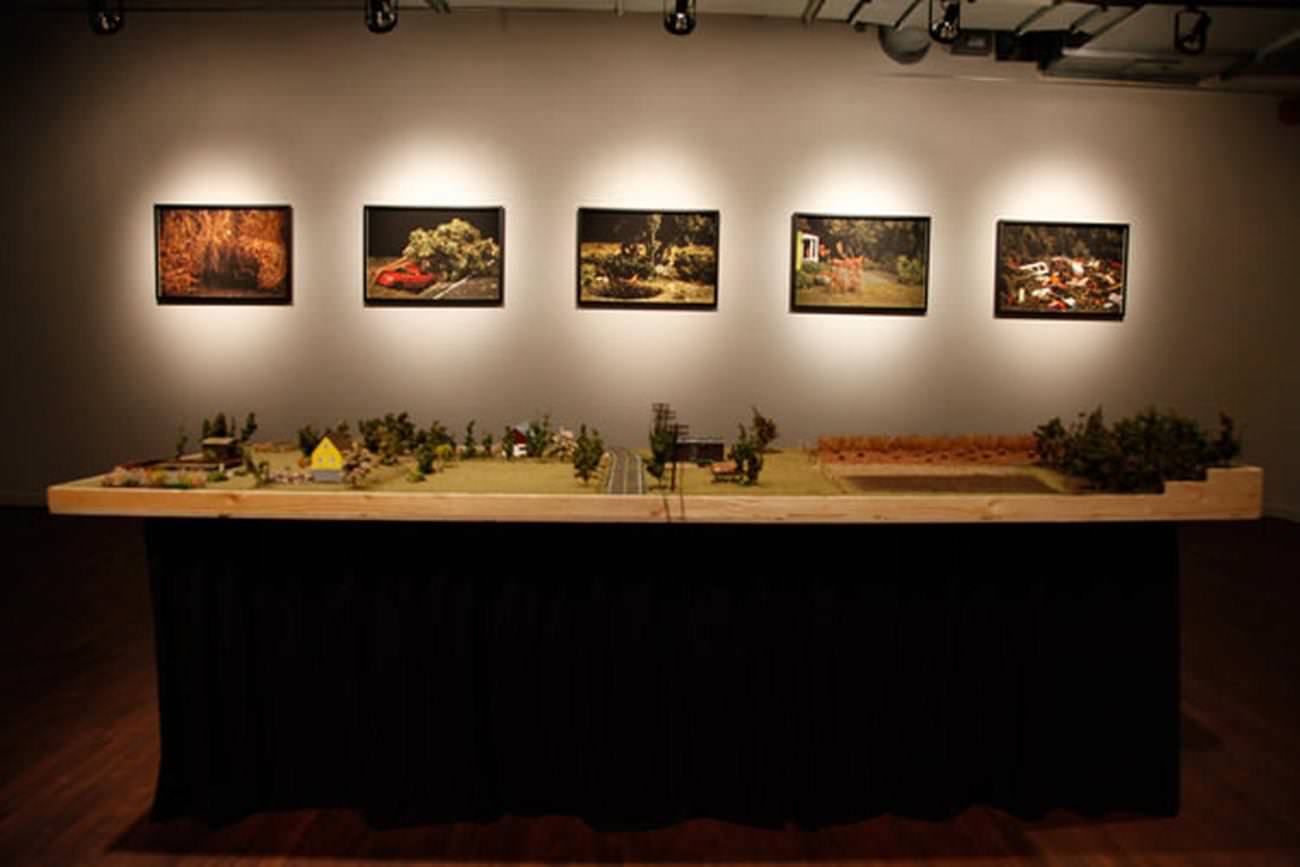 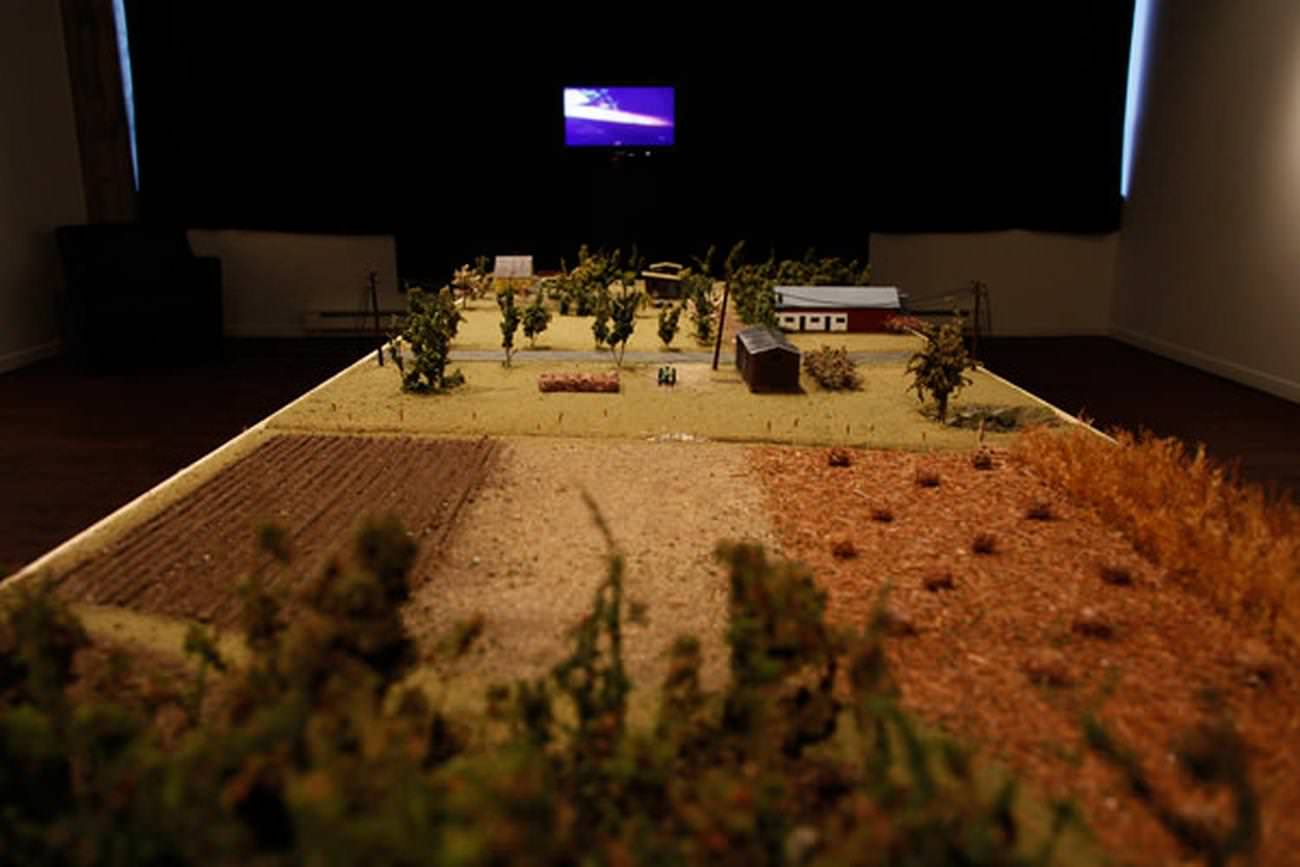 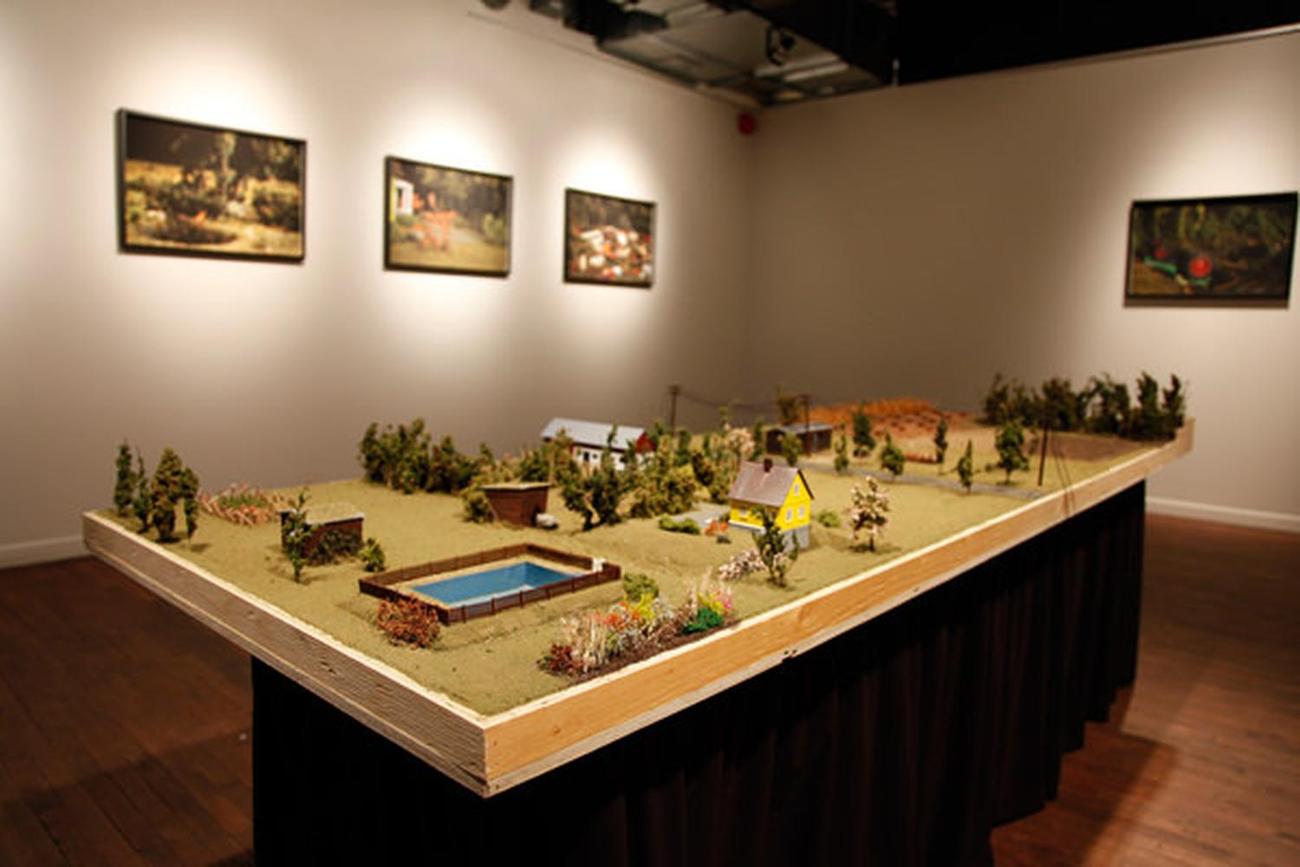 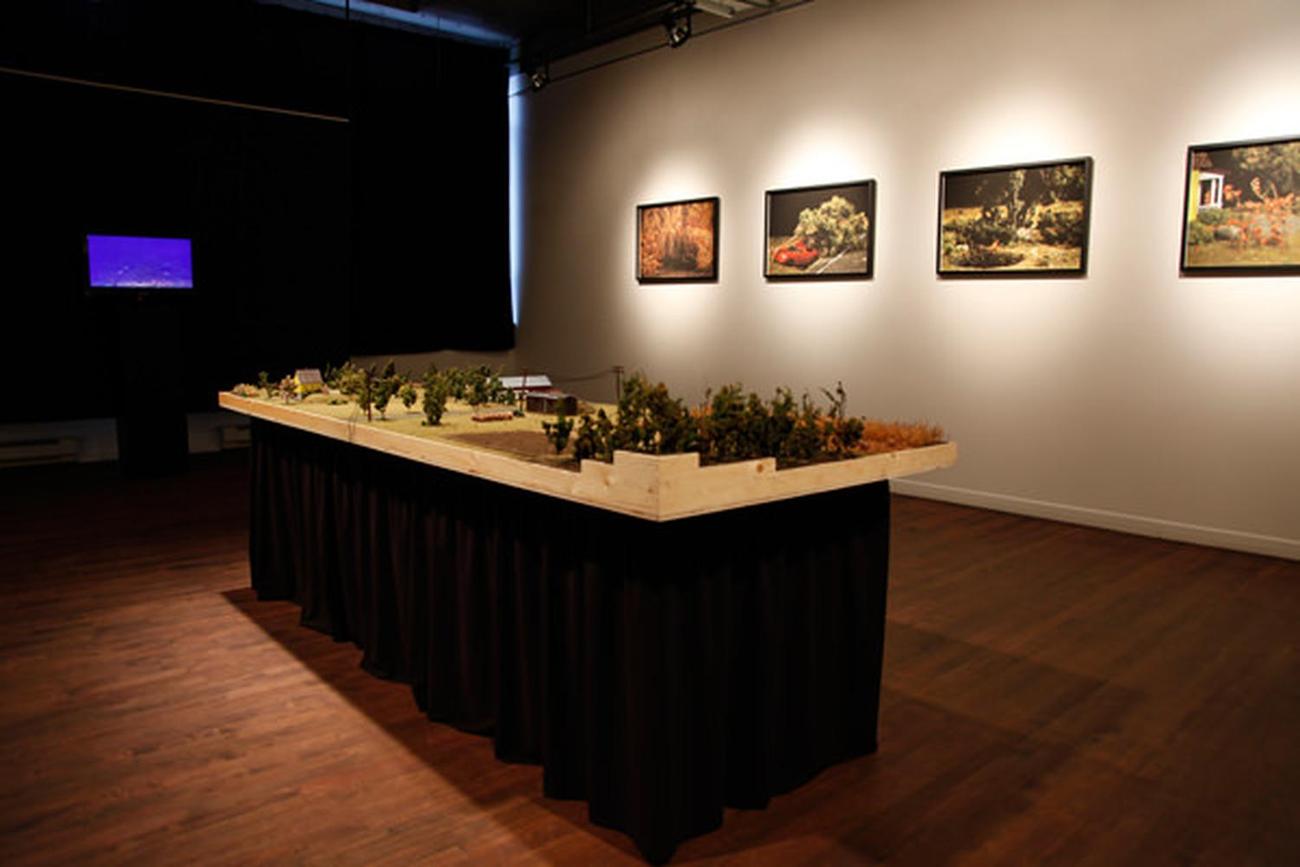 Galerie Simon Blais is pleased to present the work of Catherine Plaisance, the 2011 recipient of the Sylvie and Simon Blais Award for Emerging Visual Artists. Her exhibition Infortunes uses a combination of several different media to provide various possible readings of a single topical event covered in the news. “Inside the dark gallery, photographs, a scale model and video interact in both obvious and mysterious ways. Obvious, because we can recognize glimpses of the same place and the same objects; mysterious, because the thread linking the tableaux making up the half-lugubrious, half-playful scene before us seems riddled with, if not impossibilities, then at the least incongruities hindering any attempt at narrative reconstruction. . . . Loaded with all this ambiguity and fragmentation, Infortunesdoes not so much make us see specific, disastrous events that have actually occurred and are replicated here, as lead us towards the concept and the representation of generic disaster—the disastrous. . . . We observe (voyeuristically?) sometimes the effects, sometimes the causes, and sometimes the reactions of the protagonists, but never the entire picture, in the same way that the works play out outside that liminal, elusive space between the image and its frame. . . . It is apparently by making use of these tensions and multiplying the “layers” of distancing—a cumulative effect that itself ensures a succession of representations, and numerous ways of physically and logically placing the work in situ—that Infortunes is able to reiterate the strange magnetism of intermingled attraction and disgust, as well as rapacious curiosity, that tragedies experienced from a distance engender. All of which lends the disaster its seemingly unfailing power to fascinate and excite the sorry types of “onlookers to tragedy” we are here.” (Excerpt fromInfortunes, by Marjolaine Arpin) Catherine Plaisance is a multidisciplinary artist working in photography, installation, drawing and video. Her work has been exhibited in a number of venues, including at the Athens Institute for Contemporary Art (Athens, Georgia, United States), SAS Galerie (Montréal, Canada), Galerie Sans Nom (Moncton, Canada), Maison de la culture Mont-Royal (Montréal, Canada), Biennale Internationale de l’Image de Nancy (Nancy, France) , and Manif d’art 3 de Québec (Québec City, Canada). In collaboration with artist Christian Barré, she has created a body of photographic work that has been shown in various exhibition spaces in Canada, the United States and Poland. She is a co-founder of the performance collective Les Fermières Obsédées, whose metaphorical productions blend a number of different artistic disciplines. Active in the group from 2001 until 2009, she took part in performances staged in Canada, Australia, France, Northern Ireland, Wales and Poland. She has received a number of grants from both the Conseil des arts et des lettres du Québec and the Canada Council for the Arts. Catherine Plaisance lives and works in Montréal.